Fresh off of the Hans heartbreak, I briefly considered giving up dating. Was I even ready for it? Did this whole Hans thing prove that I needed more time to be single? I could take a break for a while, refocus on myself, and come back to dating in a few months. That’s the logical thing to do, right? Who the hell am I kidding here? The best way to get over a guy is to find another one, or two! One thing my area definitely has an abundance of is good looking, available men. It would be a shame to waste those last few days of Tinder Gold that I had paid for. One of the many benefits of Tinder Gold is that I have the option to view all of the guys who have already swiped right to me. Since I hadn’t been on the app in a few weeks, there were over 600 to look through. This could take a while. However, there was a good chance that one of those could be another sexy dad.

While I didn’t find another sexy dad, I did quickly find several new guys to talk to. Two of them became Bachelors #5 & #6. I met up with each of them just a few days later. Although 5 & 6 overlapped, I’m going to do something crazy here and combine #5 & #7 for this post. Why am I skipping over 6? Don’t worry, we will get to him. He just deserves his own blog entry.

Ah, Bachelor #5. The adorably handsome, 25-year-old, man in a uniform. (Can we all just take a minute to collectively sigh over that image?) Actually, what caught my attention most wasn’t the uniform, but rather the fact that he’s wearing sunglasses in all but one of his pictures. It was confusing, but somewhat intriguing that I couldn’t see his eyes. The one picture sans glasses was taken from far away, so I still couldn’t get a good idea of what his eyes looked like. Eyes are a big deal. I’ve seen people who look like Tom Cruise in sunglasses, but the second they take them off they look like Gary Busey. This guy could be my Tom Cruise though, so I took a chance and swiped right.

#5 messaged me first. We skipped over the lame small talk thing, and jumped right into making fun of the people on Tinder. He was pretty funny, and easy to talk to. I really wanted to see some pictures of him without the glasses though, so he gave me his Instagram and I creeped his account. He was more Tom than Gary, so crisis averted there. There were lots of pictures of him in his uniform too, which fed my secret desire to play the damsel in distress. However, he works for a branch of the military, and I quickly found out that he actually lives close to the base. Three hours away. 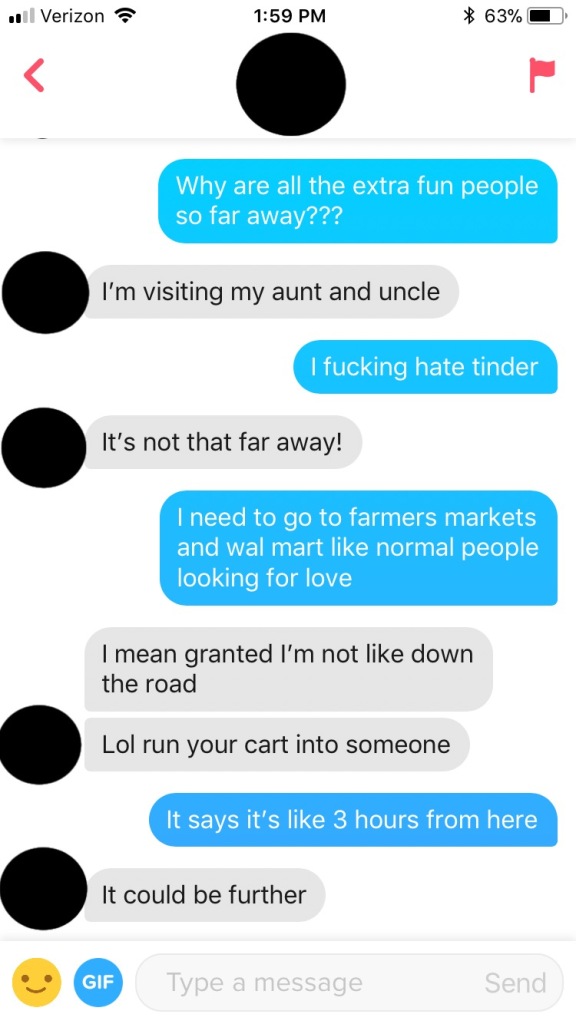 Thanks Tinder. Another guy that’s not even close to living in the same zip code. I guess it was my fault for swiping the day after Thanksgiving. He was here visiting his Aunt and Uncle, so that’s how he came up on my Tinder radar. He was in town for one more day, and suggested we meet up for coffee before he left. I was obviously hesitant, considering what just went down with Hans. Why on earth would I want to meet another person who lives so far away? What if I went full on damsel and he totally swept me off my feet? I’d be stuck making a long drive out to see him on the weekends. I didn’t think I even wanted to chance it. Then, I realized that the donut place I really wanted to try was right in between his Aunt’s house and mine. Fuck it. Donuts and coffee with a cute military guy sounded like a decent way to spend a Saturday.

He couldn’t meet up until early afternoon, so wouldn’t you know it? The donuts were all sold out by then. Plan B was a cute little restaurant I wanted to try. When we met  there he mentioned how he had parked by a brewery, and beer in the middle of the day sounded like much more fun, so that’s where we went instead. We were the only people at the brewery, but we didn’t care. He got us each a beer and we sat and talked. #5 had me laughing the whole time. This was just a day or two after I had decided to write the blog, so I even told him about it. He thought it was great, and we laughed about how stupid dating is, and joked about how I most likely had hit rock bottom at this point. By the time we left a few hours later, the brewery was full, and we hadn’t even noticed. I had a nice time with him, and hoped to see him again. We still text and snap each other on and off, and have developed more of a friendship, which is fine with me because I just can’t do the long distance thing. (Although, playing the damsel in distress does sound like so much fun!)

It’s no secret that I had a hard time over the holidays. I’m going to assume that y’all read my post about it, and I won’t get into it here. (If you didn’t, here is the link: https://30-and-dating.com/2017/12/23/six-months-in-and-its-christmas/) I was also fresh off of another punch to the ego, courtesy of Bachelor #6.  So, here I was caught between the decision of continuing to date or not, yet again. I decided that I needed to approach this differently. Up until this point, I was swiping right to only the hottest guys. It had been over a decade since I could choose a new one, so I think I was trying to prove something to myself. If I was going to have to start over, I was going to get me a looker, the kind that would leave my friends speechless. Someone who’d let me run my fingers down their abs all day long.  Someone I had no problem staring at for the next 50 years. Here’s the thing about those guys though, most of them are completely, emotionally unavailable. They use up so much of their love on themselves, that they don’t have any left to give.

Instead of looking for the hottest guys, I was going to look more for the “guy next door.” He still obviously had to be attractive, but not so into himself that he couldn’t pay attention to me. I also needed to look more for the men who have been divorced, and preferably have children. These men were less likely to be into playing games, and they could relate. Those of us with kids know that the little buggers take up 90% of our time, and that precious 10% can’t be wasted on “Are we doing this, or not?”

Bachelor #7 is a 29-year-old, handsome, divorced (but no kids), blue collar, hardworking man, who lives just a few miles from me (Finally, right?!) and whom I actually Super Liked. He seemed like my new “type” (with the exception of the no kids thing of course) and I loved that he lived so close to me. He had moved here a year and a half ago to start over, and had the same attitude I did about dating. We started talking on Christmas Day, he was out of town visiting family, but would be back the next day. The girls were with their Dad, and I had several days off of work, so we made a date for the following evening.

He suggested that I come over and we could cook dinner at his place, if I felt comfortable enough doing so. Well, y’all would be proud of me here, because I think I finally learned a thing or two (Wait, I just thought about the thing I did recently…) because I said no. I wanted to meet him in public first, before making any dates at his house. He understood, and picked up the phone and called me (You’d be surprised just how few men will actually call you anymore!) to figure out where we wanted to go for dinner.

Dinner was at a casual, local place, and we didn’t have any trouble thinking of things to talk about. Since we seemed to be getting along, and neither of us was ready for the date to end, we went bowling. I’m a terrible bowler, but I didn’t care, it was just for fun anyways. Turns out he’s equally as bad and we had fun laughing at just how horrible we both were. He joked that since my parents were bowlers, I was probably hustling him and would kick his ass in the end. By some crazy miracle, I bowled three strikes in the 10th frame and ended up winning! It was hilarious. 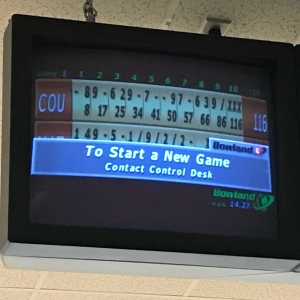 We didn’t talk much over the next few days, as he was busy working. It was almost New Year’s Eve, and I originally had big plans for that night, but it didn’t work out. Thankfully, #7 sent me a text asking me if I had any plans, and I was happy that I wasn’t going to have to spend NYE alone! He suggested cooking dinner at his house again. I still wasn’t sure how I felt about it. I was trying to be more cautious, and I couldn’t help but feel like he had certain expectations if I went there. After thinking about it, I eventually text him saying how I thought he was expecting a hook up, and I didn’t want it to be like that. The text he sent back made me laugh out loud. I’ll let you read it for yourself. Let’s just say we haven’t talked since, and I’m thankful I didn’t waste any more of my time on him! I guess I’d rather spend NYE alone than with some asshole!

To be continued with Bachelor #6, the one who was supposed to end the blog…

View all posts by cshannon86